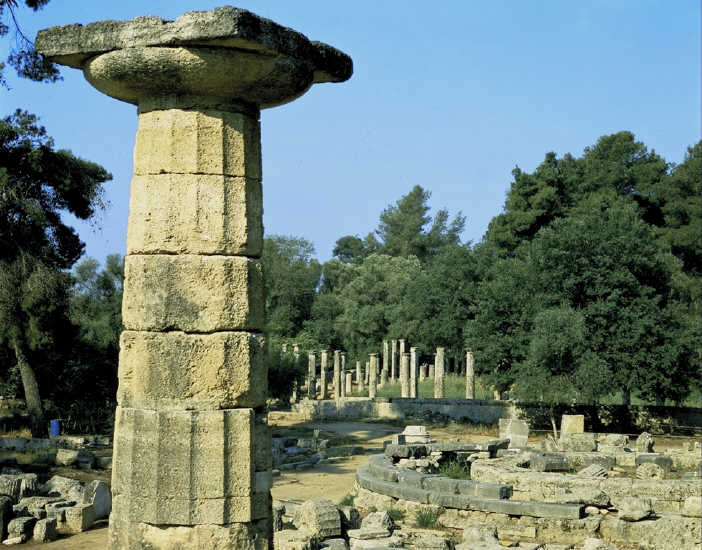 With the International Olympic Committee (IOC) ready to drop wrestling starting with the 2020 Games, many of the world’s top young wrestlers are hoping to change its mind by taking part in a tourney July 20-21 at the site where it all began: ancient Olympia.
The site in western Greece is 320 kilometers (200 miles) southwest of Athens, and normally off limits to sporting competitions and is used for the Olympic flame lighting ceremony. Wrestlers from 15 countries are taking part.
Wrestling was one of the sports at the ancient Olympics in 776 B.C., which also included running, boxing, long jump, javelin and discus, and brought back with the Modern Games that began in Athens in 1896 but the IOC prefers sports such as rhythmic gymnastics and synchronized swimming, saying it appeals more to the young and TV audiences.
“This was the birthplace of wrestling… so we are going back to our roots,” Nenad Lalovic, the head of the sport’s governing body, said.  “We were very happy to be allowed to use a place like this for a wrestling tournament – and we’re very thankful.”
The IOC in February dropped wrestling from a list of core sports, leaving it to compete for a place in the 2020 Games against baseball and squash, neither, of course, which were around in ancient times and neither of which represent the Olympic spirit as does wrestling.
A decision will be taken on Sept. 8 when the IOC’s executive board meets in Buenos Aires, Argentina, site of the 2016 Games, to select the host city for those Olympics, with Istanbul, Tokyo and Madrid in the running.
Lalovic, a 55-year-old Serb, took over the federation after the sport’s exclusion, and said he hoped sweeping changes to the body’s operating rules and new international competition rules for the sport would help get wrestling re-instated. “We had a medieval constitution and we changed that,” he said.
“The Olympic Games are limited by the number of disciplines, and of course everyone who doesn’t follow the instructions of the organizers must be punished. It’s like having a very fast car and ignoring the speed limit.”
Male and female wrestlers from Albania, Brazil, Germany, Great Britain, Greece, Iran, Russia and the United States, will compete in the tournament, which will be run under the new rules passed by the FILA Bureau at the Extraordinary Congress in May.
The 2012 World Silver Medalist Helen Maroulis will represent the U.S. at 55 kg/121 lbs. Maroulis is a Greek-American and has family living in Greece. This will be the first time she has ever competed in Greece. Ranked second in the world, Maroulis won the 2013 U.S. Open and U.S. Team Trials.
“I am so excited. When I heard that Coach Terry Steiner gave us the option, I said, yes, please can we go? My dad is from Greece. He grew up in a small town called Kalamos. I go to Greece a lot to visit family, but we go straight to the islands. I found out we are going to the mainland, to the big city, and I’ve always wanted to wrestle in Greece. I am excited to experience wrestling in that country,” said Maroulis.
The finals, for all weight classes and styles, will be staged at the International Olympic Academy and shared via livestream on the official FILA Facebook page at https://www.facebook.com/fila.official In addition to the matches, wrestlers will have the opportunity to walk the grounds of Ancient Olympia, including the Palaestra and the Stadium at Olympia.
The campaign to restore wrestling to the Olympics has received enthusiastic backing from Greek sporting authorities and the conservative-led government, which agreed to host the weekend events despite steep cuts in public funding due to the country’s financial crisis and international bailout.
“We are determined to offer every possible form of support to keep wrestling in Olympic competition,” Yiannis Andrianos, a Deputy Minister for sport, said earlier this week.
“It’s an obligation we have both to modern Olympic history… and in our roles as guardians of the heritage and spirit of the ancient games. Wrestling is a connection between the two.”