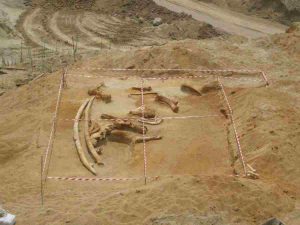 Rhinos, giraffes, gazelles, ponies and antelopes were living in the plain of Drama nine million years ago, as was revealed by the fossils found in the region Platania of the Municipality of Paranesti in the Regional Unit of Drama, Eastern Macedonia.
The excavations carried out in the region brought into light some very important paleontological findings, which give new information concerning the history and the geology of the region.
The excavation team of the Aristotle University of Thessaloniki, led by the Geology-Biology Professor Evangelia Tsoukala, conducted excavation researches over the past seven months.
The real digging began about a year ago, after the suggestion and the encouragement of the Mayor of Paranesti Nikos Kagiaoglou and of the residents of the region who knew about the existence of fossils.
“We believe that these are the most ancient fossils found, not only in the region of Drama, but throughout Eastern Macedonia and Thrace,”. Tsoukala told the Greek news agency AMNA.
“These findings help as to get to know the history of Platania, i.e. to know that nine million years ago, the region was a savanna inhabited by rhinos, giraffes, gazelle’s ponies, mastodons, who are the ancestors of elephants, even antelopes. We found a rich fauna of that era in the region. It is considerably interesting to represent the paleoenvironmnent of this region and to prove its timeless quality.”
According to Mr. Kagiaoglou, there’s a thought to house the findings in the building of an old school, which doesn’t operate anymore and can be turned into an archaeological museum.
“Our aim is to continue the excavations. The municipality will offer any possible support and assistance (whether financial or moral) to our effort. We have decided to address similar requests to the relevant ministries in order to find some financial support, as our aim is to highlight the region and to use it for tourism”, said Mr. Kagiaoglou, who estimates that this excavation research is particularly important for the Municipality of Paranesti, as it offers significant benefits and will create new jobs in the future.