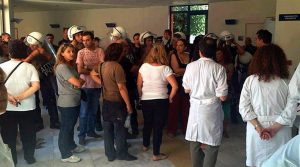 New Health Minister Adonis Georgiadis, whose appointment in a Cabinet shakeup raised eyebrows because of his extreme stances, got a hostile reception and a beatdown when he visited Attikon Hospital in Athens from staff angry he’s going to be cutting health care budgets and shutting down hospitals.
Protesters gathered long before he was due to show up, anxious to show them how furious they were at the government’s continued austerity drive. There had been a communication circulating at the hospital that he was “unwelcome.”
When he got there, he was verbally assaulted and reportedly attacked by a group of people. who pushed him and beat him, while his colleagues claimed that when he Georgiadis returned to his office he had “obvious signs of blows on his neck.”
Other reports said that people who attacked the minister shouted slogans not related to claims in the ​​health care sector but there was no clarification on what really happened, although police intervened to protect him and pulled him out of the corridors where he was being surrounded by a crowd.
After the incident, the minister spoke to the doctors and hospital staff who reportedly apologized to him, although there was no report if he apologized to them for cutting their budget.
Earlier in the morning, Georgiadis made an unannounced visit to the General Hospital of Nice, where he was given a grand tour of the facilities. , where after he was toured to the corridors and chambers, he was informed by employees and physicians of the conditions at the hospital.
Georgiadis was formerly a member of the far-right LAOS party, had no background in health care and was best known for his odd appearances on TV selling books about Greek history and espousing support for extreme views and dictators.
Prime Minister Antonis Samaras, the New Democracy Conservative leader, gave no explanation why he appointed someone with no apparent qualifications to such a critical position during a crushing economic crisis.