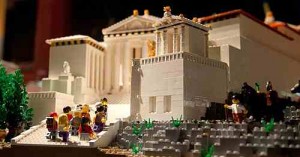 Sydney’s Nicholson Museum is featuring an exhibit of one of the ancient world’s iconic landmarks, the Acropolis of Athens – built with the LEGO toy set. The opening was marked by a lecture from the man who used the LEGO tools to design the set, Ryan McNaught, and with traditional Greek dances, re-enactments by Hoplite soldiers of life in Ancient Athens and Greek food.

The LEGO Acropolis exhibition, which is the next step after the successful LEGO Colosseum exhibition in Nicholson Museum in 2012, shows the Acropolis both as it was in the 5th-Century B.C. and as it is today as one of Greece’s most popular tourist attractions.

The model also includes the Odeon of Herodes Atticus, a large amphitheater of the 161 A.D. which is still used nowadays as a concert venue. In the Odeon model the concert venue hosts a LEGO Elton John as a headline artist.

The LEGO Acropolis includes the representation of certain details, as one can see LEGO Lord Elgin stealing the marbles from the Parthenon, LEGO Theseus winding his way through a labyrinth to face a LEGO Minotaur, and LEGO Tony Mokbel, the Australian fugitive caught in Athens in 2008, looking suspicious in an ill-fitting wig.

The model of Acropolis is the result of the work of the only LEGO Certified Professional in Australia, McNaught, who is from Melbourne. The construction took him almost 300 hours and more than 120,000 LEGO bricks to build. McNaught also built the LEGO model of Colosseum, which was exhibited in 2012.

Apart from the representation of Acropolis by LEGO, in the exhibition one can also admire real ancient Greek archaeological artifacts from the Nicholson Museum’s extensive collection, including sculpture, pottery, and original 1890’s photographs of the Acropolis.

The exhibition aims to attract children, and to address to their imagination. The Senior Curator of the Nicholson Museum, Michael Turner, said he hoped that the LEGO Acropolis will offer to children an experience that will cultivate their interest for museums and learning in general.

“I remember going to the British Museum as a kid, and can still remember the experience vividly. It was so completely different to anything else I’d ever seen,” Turner said.

“Increasingly, museums and galleries around the world are realizing the importance of engaging with kids – and, in this online age where images are everywhere – the challenge. If we can create an extraordinary experience, an enormous LEGO model in a museum of antiquities, then it’s likely that they’ll never, ever forget it,” he said.

As we read in the website of the University of Sydney, the Nicholson Museum is the only Museum in Australia which has signed up to the manifesto of Kids in Museums, an independent initiative aiming to make museums open and welcoming to all family and especially for families who haven’t any prior experience in museums.

The manifesto includes advice aiming to break the ice, such as “don’t say ssshhhush,” and “be height and language aware,” and “invite teenagers into your gang”.

After the great success of the 2012 LEGO Colosseum, which turned to be the most popular exhibition in the Nicholson’s history with more than 80,000 visitors, Turner said he hopes the Acropolis will be even more successful, and is aiming for 100,000 visitors.