Greece Puts Railways Up For Bid 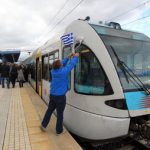 Still reeling from setbacks in its lagging privatization program, Greece has invited bids on its notoriously-inefficient and antiquated state-operated railway operator Trainose, the Hellenic Republic Asset Development Fund (HRADF) said.
The deadline for interested parties to submit binding offers for the acquisition of 100 percent of Trainose’s share capital in the first phase of the international tender expires on Sept. 16.
The announcement came as Athens has lowered targets for raising revenues via the privatization program this year from the initial 2.6 billion euros ($3.39 billion) to about one billion euros ($1.3 billion) after a failure to get a single bidder for gas company DEPA in June.
In 2010, when Greece launched the austerity and reform program to address the threatening debt crisis with the support of international lenders, under bailout deals pledged to raise approximately 50 billion euros ($65.3 billion) through the sale or lease of state assets by 2015, a goal the government admitted is unattainable.
The Greek railway system is one of the worst in Europe, poorly-maintained, frequently running late and with criticism that there are more employees than workers. At one point it was so bad the system was losing a billion euros ($1.3 billion) a year and a former minister quipped it would be cheaper to hire taxis to take Greeks wherever they wanted to go.
Before the tender is completed, Trainose will also have signed a series of contracts with the state and with parent company Hellenic Railways Organization (OSE) designed to create a smoother operation of the deeply-troubled company in the coming years.
The five contracts Trainose will have to sign will be: a five-year public service supply obligation contract for unpopular, subsidized routes for a annual fee that will not exceed 50 million euros ($65.3 million); a track access contract with OSE in its capacity as operator of the National Railway Infrastructure; a long-term contract on carriage leasing with OSE; a long-term contract with the Hellenic Carriage Maintenance Company (EESSTY) for maintenance services, and long-term agreements for the lease of selected properties.
Bidders must have an average of at least 100 million euros ($130 million) in group assets in the last three financial years if they are companies, while funds will need to show at least 200 million euros in active and non-committed capital over the last financial year. The conditions add that if a bidder is a consortium of companies, the head of the consortium will need to own at least 34 percent of it.