Hand and Wing For Louvre’s Nike 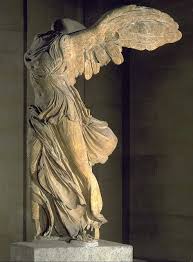 The right hand and the right wing of the Nike of Samothrace, the famous statue discovered in the Greek island of Samothrace in the second half of the 19th Century and which has been since exhibited in the Louvre in Paris, are going to be replaced.

The American School of Classical Studies got permission from the Central Archaeological Council to use the  moulds of the marble fragments of the Victory of Samothrace.

The fragments will be digitally scanned to products casts that will be taken to the Louvre and attached to the timeless masterpiece, in a process that will also include cleaning of the statue.

The Nike of Samothrace, discovered in 1863, is estimated to have been created around 200-190 BC. It is 8 feet high. It was created to not only honor the goddess, Nike, but to honor a sea battle. It conveys a sense of action and triumph as well as portraying artful flowing drapery through its features which the Greeks considered ideal beauty.

The statue’s outstretched right wing is a symmetric plaster version of the original left one. As with the arms, the figure’s head has never been found, but various other fragments have since been found: in 1950, a team led by Karl Lehmann unearthed the missing right hand of the Louvre’s Winged Victory.

The fingerless hand had slid out of sight under a large rock, near where the statue had originally stood; on the return trip home, Phyllis Williams Lehmann identified the tip of the Goddess’s ring finger and her thumb in a storage drawer at the Kunsthistorisches Museum, Vienna, where the second Winged Victory is displayed.

The fragments have been reunited with the hand, which is now in a glass case in the Louvre next to the podium on which the statue stands.