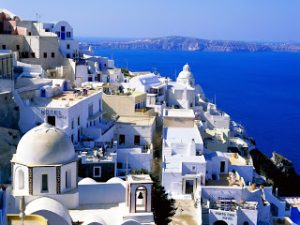 Looks like the cut-rate bargains for Greek holidays are ending, as hotel owners who last year slashed prices in a desperate bid to bring in business when visitors frightened by scenes of protests were staying away, are increasing them as they are returning.
With 2013 looking like a record season that could bring in 17 million tourists, the prices for accommodations rose in July, the high period.
On average, the most expensive destination is Imerovigli on the island of Santorini, which is overrun in the summer and so crowded you can hardly move in the most popular areas. It will cost you 335 euros ($437) a night to sleep there.
The town of Ia, Santorini, ranks second at 319 euros, while in the third place is the village Firostefani, Santorini, with an average price of 288 euros.
The same list shows that the destinations with the higher increase in the average hotel price are Vasiliki in Lefkada with an increase of 78% in comparison to last July, followed by Kardamena in Kos with an increase of 72% compared to last year and Agios Stefanos in Mykonos with an increase of 67% in comparison to July 2012.
The list of the five destinations with the largest price increase is complemented by Mykonos (Hora) and Ialysos with an increase rate of 59%.
The most expensive destination for July 2012 was Elounda, Crete, with an average accommodation price of 291 euros while the second most expensive destination was Ia, Santorini, with 258 euros per overnight stay. Imerovigli was in third place of the most expensive destinations with 256 euros.