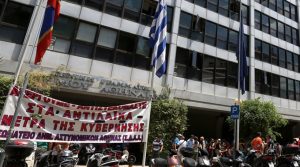 While the Minister of Administrative Reform, Kyriakos Mitsotakis, was informing on July 10 Prime Minister, Antonis Samaras, and Deputy Prime Minister,  Evangelos Venizelos, about the progress of the administrative reform at the Maximos Mansion, the POE-OTA (Federation of workers of all specializations in the Municipalities and local communities of Greece) was deciding to continue and intensify their reactions.
Debate on the bill to eventually fire school guards and municipal police will start on July 11 before a parliamentary committee.
Specifically, the meeting of the General Council of POE-OTA decided a work stoppage on July 11 in all the municipalities of the country, after the urgent submission of the bill to Parliament. POE-OTA decided to repeat protests and occupation of the country’s municipalities and declared a work stoppage from 12 at noon until closing time.
For July 11, POE-OTA also called for a protest rally at Klathmonos Square at 12.30 p.m. Similar actions have been scheduled for the next day. The municipality trade union of workers declared a work stoppage at 11:30 a.m., and called a rally at Karaiskaki Square for 12.00, which will march to the Parliament.
Furthermore, POE-OTA urges workers to abstain from their duties during the weekend, while the protests will escalate next week when the bill will be voted. A gathering and a concert at Syntagma Square has been planned for July 15. The next day, when the bill is being voted, municipality workers will participate in the strike declared by GSEE and ADEDY.
The municipality workers will try to get the mayors by their side and gain the support of the Central Union of Municipalities and Communities of Greece. The workers also believe that their participation in the meetings of the municipal councils throughout the country is a decisive step, to the extent that the mayors convene them.