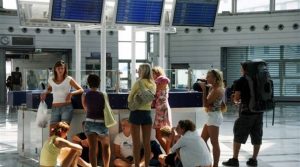 Greek Minister of Development, Competitiveness, Infrastructure, Transport and Networks Kostis Chatzidakis discussed with businessmen from Poland the prospect of attracting investments to Greece while he said 2013 is a critical period.
Greece this year expects some 380,000 Polish tourists, the importance shown by DGreek President Karolos Papoulias’ visit to Poland with Tourism Minister Olga Kefaloyianni to meet representatives of the Polish tourism market.
Last year, 250,000 Polish tourists came to Greece. Minister of Development Kostis Chatzidakis had the chance to meet the Polish business community, which consists of 45 Greece enterprises, with the chain of stores Play of Germanos Group, Coca-Cola, Intralot and other among them.
Chatzidakis discussed with the Polish businessmen the prospect of attracting investments from Poland to Greece and added that 2013 will be a year of critical importance and turnaround point for the development of Greek economy.
On July 8 Papoulias held meeting with his Polish counterpart, Bronislaw Komorowski, and the political leadership of the country and on July 9 he will visit Cracow to pay homage to the victims of the Nazis at the Auschwitz concentration camp.