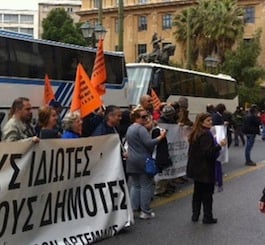 Greek municipal workers went on strike Monday to protest government plans to reduce the number of civil servants, a measure demanded by Greece’s international creditors before they approve their next bailout installment for the country.
The country’s civil servants union, ADEDY, also called a four-hour work stoppage from noon for all civil servants in the capital, Athens. The municipal workers’ strike was expected to see all local services, including trash collection, suspended, with the exception of welfare and social services.
The latest stoppages come ahead of a Brussels meeting later of the finance ministers of the 17 European Union countries that use the euro where Greece’s bailout will be a major topic of discussion.
(source: AP)