Greek Hospitals Dangerous To Your Health 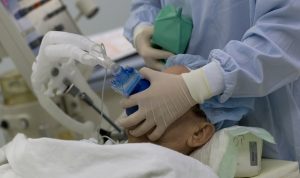 Greece has achieved another negative distinction, this time about the excessive use of antibiotics and hospital-acquired infections, known as a nosocomial infection whose development is favored by a hospital environment, such as one acquired by a patient during a hospital visit or developing among hospital staff.
According to a report by the European Centre for Diseases Prevention and Control (ECDC), Greek patients rank first in Europe in antibiotics consumption and fourth in nosocomial infections.
These two “records” are directly connected the one with the other as antibiotics overuse is a chronic problem in Greece which has created multi-resistant germs. “The survey confirms that healthcare-associated infections pose a major public health problem and a threat to European patients,” said Marc Sprenger, ECDC Director, according to a statement.
He added that “Many of these infections could be prevented by sustained, multifaceted infection prevention and control programmes, including surveillance of healthcare-associated infections, extremely serious and often fatal hospital-acquired infections to patients,” he added. The ECDC said also that hospitals should limit their use of broad spectrum antibiotics.
The same report shows that about 3.2 million people in Europe suffer from healthcare related infection. Of those patients, a 19.5 percent were infected while hospitalized in ICU.
According to data from the ECDC, at least 3.2 million patients in the old continent contract during their hospitalization in a hospital, private or public, infection after a contamination with some nosocomial microbes, with 19.5% of patients infected during hospitalization in the ICU.
Greece is very high in the ranking, having fourth place in Europe in nosocomial infections, with the top three of the list consisting of Portugal, Iceland and Denmark.
The most common types of infection recorded by the survey to 1,000 hospitals in 30 European countries are respiratory infections such as pneumonia and blood infections. A total of 15,000 hospital-acquired infections, with the main causative bacteria Klebsiella pneumoniae and E.coli, which have great resistance to some of the most powerful antibiotics.