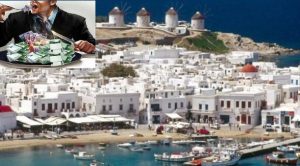 While the rest of the country is plagued by crisis, with unemployment rate at 27 percent, the island of Mykonos is rolling in the dough with an avalanche of tourists spending money like there’s no tomorrow.
According to the Guardian, some 1.5 million tourists will stay on Mykonos by the end of October, making it a banner year.
The word “unemployment” seems also unknown in Mykonos, as everybody has been absorbed in the tourism sector. Around 5,500 people came to work the summer period in Mykonos in order to cover the ever increasing vacancies in tourist professions.
In April 2013 tourism rose by 360 percent compared to the same month in 2012, while in May 2013 the rise in tourism reached 120 percent compared to the same month last year. Predictions say that this year’s summer season will close with an increase of 15 to 20 percent.
Those estimates are for arrival by air and sea, while it is estimated that this year more than 600 cruise ships will dock at Mykonos Port. Mykonos is also considered as one of the top holiday destinations in Greece in charter flights. The island is also popular with visitors from India because of a well-publicized grand event last year.
Tax evasion had been a big problem with businesses trying to hide their income from authorities who have stepped up checks in return, and there is a growing interest in buying real estate on the island.