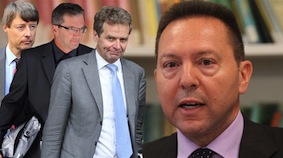 As the government tries frantically to satisfy international lenders it is making enough progress in reforms to trigger release of a delayed 8.1 billion euro ($10.6 billion) installment, Bank of Greece Governor Giorgos Provopoulos is jumping into the fray to help the negotiations.
Envoys from the Troika of the European Union-International Monetary Fund-European Central Bank (EU-IMF-ECB) are meeting Finance Minister Yannis Stournaras and new Adminstrative Reform Minister Kyriakos Mitsotakis in a bid to untangle a knot over the firing of public workers and how to plug two 1-billion euro ($1.3 billion) holes in the budget caused by failing privatization plans and health care debts.
Provopoulos was expected to offer advice on the delayed recapitalization of Greek banks with the government planning to give them 50 billion euros ($65 billion) in the hope they will start lending again and try to reignite growth in a debt-crushed economy floundering in a sixth year of a deep recession with a record 27.4 percent unemployment.
The banks have more than 25 percent in non-performing loans, including 250 million euros ($321.9 million) from Prime Minister Antonis Samaras’ New Democracy Conservative party and his coalition partner, the PASOK Socialists, who also receive free public funding from the treasury but aren’t paying their loans.
The government and Troika officials appeared to be edging close to a deal and solve the sorest area of dispute, getting rid of redundant public workers. Greece is reportedly offering to transfer 4,000 municipal police officers into the ranks of the Greek Police (ELAS) to be counted toward a target of 12,500 civil servants put into a so-called mobility scheme in which they would get reduced pay for a year and likely fired.