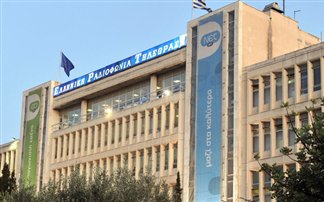 While former workers of the closed national broadcaster ERT continued to send out a pirate signal via satellite and the Internet and protest their firing, a bill making way for the replacement station, the New Hellenic Radio Internet and Television (NERIT) was submitted to Parliament.
Posted on the Parliament’s website, the bill states that NERIT will be an independent corporation, wholly owned and supervised by the state, just as ERT was.
The station’s 2,656 workers were let go on June 11 without notice but the government has continued to ignore a ruling by the country’s highest court to restore the signal until NERT is up and running.
According to the proposed bill, the Finance Minister, the Culture Minister and a minister specially appointed for matters of public radio and television, former journalist Pantelis Kapsis, will represent the state at NERIT general assemblies. “Nerit S.A.’s initial share capital amounts to five million euros ($6.5 million),” the bill added.
ERT was largely considered a dumping ground for political hires with alternating administrations Prime Minister Antonis Samaras’ New Democracy Conservatives and his coalition partner and Deputy Prime Minister, Evangelos  Venizelos’ PASOK Socialists packing it with high-paid political hires and no-show jobs. Kapsis said that wouldn’t happen with NERIT but he wasn’t asked what he would do if Samaras or Venizelos ordered him to make appointments of their choosing.
While ERT, and other stations it broadcast, such as the BBC and Deutsche Welle, remain dark on TV stations, the former workers are still broadcasting by other means from the Athens headquarters with support from the European Broadcasting Union (EBU.)
The shutdown caused national and international uproar and led to the departure of the three-party coalition’s smallest partner, the Democratic Left (DIMAR) leaving Samaras to bring in Venizelos and appoint PASOK ministers after the Socialist withdrew his objection to the firings.
Samaras has repeatedly refused to reinstate ERT in its previous form, castigating the organization for lack of transparency and waste, part of which he admitted New Democracy was responsible for, but blaming PASOK for most of the political hires. Kapsis cautioned that a solution has to be found soon. “Most of the employees want a solution by now… we are still discussing, but time is running out,” he told To Vima radio.
Greece is under pressure from the Troika of the European Union-International Monetary Fund-European Central Bank (EU-IMF-ECB) to shed 4,000 workers by the end of this year among other reforms although some reports have put the number at 15,000 including 12,500 to be put into a so-called mobility scheme and moved around to other positions.
The Troika is insisting on an overall reduction in the public sector by 150,000 positions, including retirements and firings, over the next three years in return for a second bailout of $173 billion. Greece spent a first rescue package of $152 billion without making a dent in its debt.