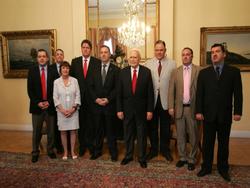 Greek President Karolos Papoulias  opened his office late in the afternoon of July 4 to the Managing Board of the World Hellenic Inter – Parliamentary Association, which was founded on August 1996 in Athens when an international delegation of elected members of Parliament of Greek descent living in non Greek speaking countries convened for the first time.
The purpose of this meeting was to organize this unique association which created a network of top level Government officials and parliamentarians from around the Globe who are of Hellenic heritage. In June 2005, WHIA acquired its current legal status in Greece.
Papoulias said to the Parliamentarians, “You have the opportunity and the ability to transfer to the parties in which you belong and represent and to the Parliaments to which you participate the real image of Greece. And you are pressure levers to some things that are fair to be done for this country and homeland of yours”.
WHIA President John Pantazopoulos, an Australian MP, Victorian Parliament, Member for Dandenong, expressed his gratitude to Papoulias for his warm welcome to Greece and said the Diaspora Parliamentarians offered their help to Greece during its crushing economic crisis..
Greece is in need of development and the reality has changed and will continue to change and we will see the best of Greece,” he said, although he didn’t explain how.