No Ships For Northern Aegean Islands This Summer 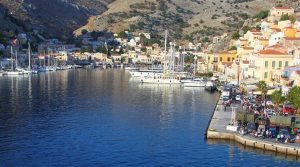 The Northeastern Aegean islands have received a crucial economic and social blow with the beginning of the summer, as the last 20 days Lesvos has been totally cut off from ship routing with Southern Greece (Lemnos-Kavala-Thessaloniki) as well as with the islands Samos and  Ikaria, while Lemnos has no connection with Piraeus.
The reason is that the car-passenger ferry, Theofilos, of NEL Lines, which has been under work retention the last days, is not running  routes. The Minister of Shipping, Ioannis Varvitsiotis, had planned a meeting with representatives from the shipping company, who,  eventually, didn’t go to the ministry.
The situation is tragic as the islands’ economies, which depend on tourism, are languishing and especially the economy of Lemnos.
“It’s like they want to condemn Lemnos, a nationally sensitive island. We expected to live off tourism, but unfortunately the success story didn’t work for our island,” the Mayor of Lemnos, Antonis Hatzidiamantis, told protothema,gr. The Mayor also revealed the malfunctions of the shipping company as well, which does not meet its contractual obligations, condemning this remote island of Greece.