Patmos, Island of the Apocalypse 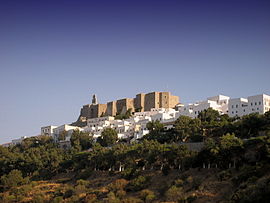 Patmos is a small Greek island in the Aegean Sea which is mentioned in the Christian scriptural Book of Revelation. The book’s introduction states that its author, John, was on Patmos when he was given (and recorded) a vision from Jesus. Early Christian tradition identified this writer John of Patmos as John the Apostle, though some modern scholars are uncertain.
As such, Patmos is a destination for Christian pilgrimage. Visitors can see the cave where John is said to have received his Revelation (the Cave of the Apocalypse), and several monasteries on the island are dedicated to Saint John.
Alexandre and Maria, a married couple with five children, told the news agency ANAmpa: “Our voyage to Patmos was a dream of life.”
According to the mayor of the island Grigoris Saikos, this year a rise by around 20 percent in the arrivals of tourists in Patmos is expected. “These data were based on the bookings for rooms and on ship tickets. We are optimistic,” the mayor stressed.
The director of the tourist company Beleon, Leonidas Dimitriades complained, however, that there isn’t a regular line from Chios to Patmos in order for the island of the Apocalypse to lure more Russian pilgrims and tourists.