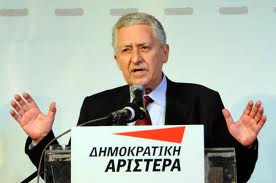 According to the leader of  the DIMAR party, Fotis Kouvelis, political leaders Samaras and Venizelos had already talked before the three of them held their meeting late last month.
“If Mr. Venizelos said that he would do everything DIMAR does, tell me why he changed his mind. I am sure now that the agreement had been made by Thursday evening by telephone communication. Let us all consider his change of stance,”  Kouvelis said on George Papadakis’ morning TV program.
“Mr. Samaras wanted elections, but when the European Union started pressing him, that changed his plans.”
He also said that the issue of ERT was for him the straw that broke the camel’s back and so he left the government. “My party did what was possible for there to be a common political ground, but it was finally a burden to do the things they decided.”
He also said on the issue of his withdrawal from the government: “This decision was not only mine, but of my party members, too.”