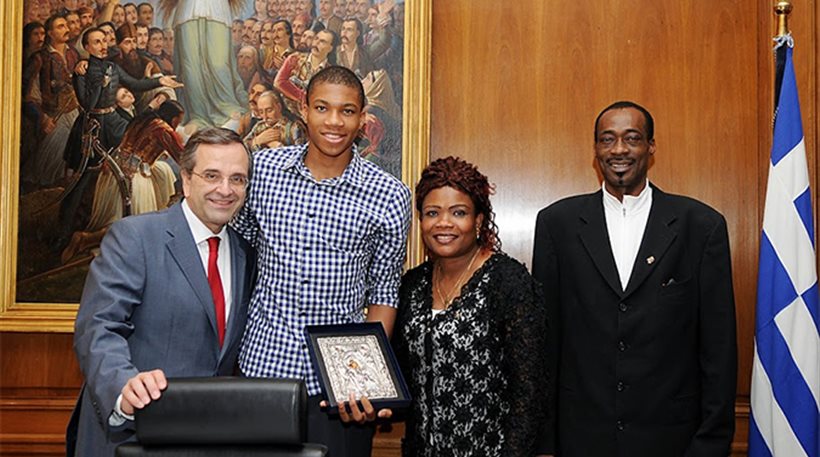 Prime Minister, Antonis Samaras, met today with Giannis Antetokounmpo and his family at the Maximos Mansion on the occasion of his No. 15 pick by the Milwaukee Bucks in the NBA draft, the highest number a Greek has ever made it to.

Culture and Sports Minister, Panos Panagiotopoulos, and the Deputy Minister for Sports, Yiannis Andrianos, were present during the Prime Minister’s meeting with the international basketball player.
During the meeting the Prime Minister said the following:
“I want to thank you for honoring our national colors. I want to thank you and tell you that it is very moving that all the Greek people have seen how you have struggled since you were a little child to help your brothers and you have become an example for many people. I want to tell you with great emotion one more thing: To speak out, the way I feel it: I hope you drive them all crazy with your dunks in America.”
He also added: “Be good, be strong. You make us very happy and thank you for the hat. We will be watching you. I would like you to know that this is a day of joy for us to see you and the whole Greece is very excited with you. We thank you for raising the flag there with your brother. You showed them a bit of Greece.”
“I would like to give you an icon of Axion Esti, to guard you in the difficult times you will have there, to make them easier,” he concluded.
Then the young basketball player talked to the journalists about his meeting with the Prime Minister. Samaras gave him an icon and Giannis Adetokunbo gave him a Milwaukee Bucks hat with his signature, as a present. Adetokundo spoke of his positive impression of the Prime Minister and of the calm way he tries to face the last developments in his professional life.