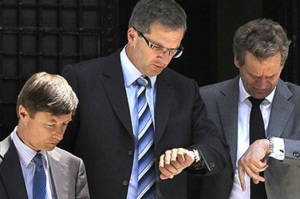 The Troika is back in town, and Greek officials said they are expecting “truly difficult” talks with envoys from the country’s international lenders, the European Union-International Monetary Fund-European Central Bank (EU-IMF-ECB) over lagging reforms and a 1-billion euro ($1.3 billion) hole that developed in the privatization scheme after the country didn’t receive a single bid for its natural gas company DEPA.
The heads of the Finance, Health, Interior, Labor and Administrative Reform ministries met to set a strategy and talking points before the discussions resumed, including what to do about the Troika’s insistence Greece fire another 15,000 public workers by the end of 2014 and get rid of another 12,500 this year, on top of the 2,656 fired at the national broadcaster ERT.
The government will also have to present plans on reining in spending at Greece’s main healthcare provider, EOPYY, which is out of control financially. A Finance Ministry officials said the aim is to finish talks before a meeting of Eurozone officials on July 8 so that Greece can get release of a pending 8.1 billion euros
The Finance Ministry official said that there will be in attempt to conclude the talks by the Eurogroup meeting that will take place on July 8. Greece hopes to receive its next loan tranche of 8.1 billion euros ($10.55 billion), although there’s a chance it could be delivered in staggered amounts and dates.
Troika officials are expected to meet new Administrative Reform Minister Kyriakos Mitsotakis, who said he will ask them for at least two more months to flesh out the plan to put the 12,500 workers due to be let go into a scheme under which they will receive reduced pay for a year.
The Troika is pushing for this year’s doubled emergency property tax to be paid in four rather than five installments to avoid a funding gap of 400 million euros ($520 million) being created by the beginning of 2014.