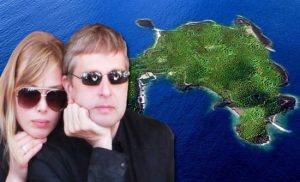 Security analysts for Russian billionaire Dmitri Rybolovlev, who bought the late Aristotle Onassis’ private Greek island, Skorpios, have advised him to use frogmen to prevent underwater access from July to October.
The Russian tycoon’s request has not received an answer yet from Greek officials, who have to the give the okay for private security. That includes approval from the police but not the Coast Guard.
If his request is denied, Rybolovlev can take his case to the Ministry of Public Order & Citizen Protection and seek to hire Greek police for security instead of private guards.
The cost ranges from 30 euros ($39) per hour for a police officer to 1,500 euros ($1,950) per hour for a helicopter. Police on the neighboring island of Lefkada in the Ionian Sea, didn’t say if they wanted to be considered for hiring.
From the time Skorpios Island was sold to Rybolovlev, the whole area has become a forbidden zone for tourists. Specially trained French and American bodyguards, with special high-tech equipment, guard the island 24 hours a day. Despite those already strict security measures, Russian consultants said they want more protection.