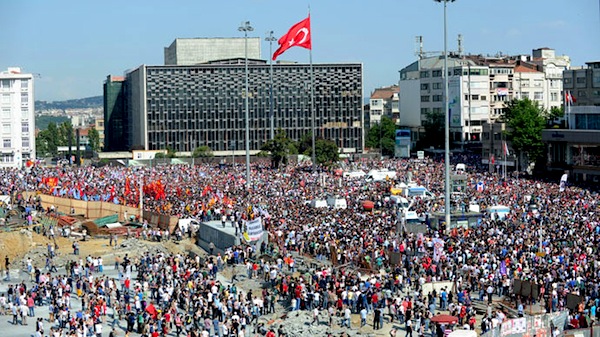 By Angelos Kostopoulos* – As the fog of the post Iran and Afghanistan wars dissipates, it is clear that the state of Hellenism as personified by Greece and Cyprus has declined in the face of the emerging hegemony of Turkey in the region.

Under the leadership of Prime Minister Recep Tayyip Erdogan and his Neo-Ottoman Foreign Minister, Ahmet Davutoglu, Turkey has reinforced its regional claims in the Aegean Sea and in Cyprus through its’ new-found strategy of “Strategic Depth.” Davutoglu’s views, “Turkey as the epicenter of the Balkans, Middle East, and the Caucasus, the center of Eurasia in general and is the Rimland Belt cutting across the Mediterranean to the Pacific.”
Since the Turkish invasion of Cyprus in 1974, the Greek’s have answered this threat to their sovereignty by protesting at international venues. The result has been Turkish intransigence and increased confidence.
Despite this erosion of Hellenic sovereignty, a tipping-point opportunity for Hellenism may be at hand in the aftermath of the Taksim Square Uprising. Turkey’s internal problems have highlighted the non-western and non-democratic trends that have characterized the Erdogan regime. The situation illustrates the dichotomy of Turkey’s persona; on the one hand a face of western democracy in a Muslim body; and on the other hand an autocratic Ottoman face that while applying for EU entry, continues the military occupation of an EU country and threatens war on another over oil in the Aegean, and generally shows a disrespect for the Rule of Law.
After nearly five decades of acquiescence, the opportunity has finally come for Greece to officially tell Turkey that they do not belong in the EU unless they respect the sovereign rights of Greece and Cyprus; a position that is silently supported by most EU members, not necessarily for the same reason. The Hellenic countries should revitalize their joint economic, political and military activities to strengthen peace in the region and clearly advocate the following:
• Economic: Creation a Hellenic Economic Council for the revitalization of the Hellenic economies of Greece & Cyprus
• Political: Removal of Turkish military forces from Cyprus and the establishment of EEZ in the Aegean for the exploitation of Greece’s oil reserves, as well as reinforcing Hellenic territorial rights
• Military; Modernization of the Greek and Cypriot militaries within the EU & NATO structures, and the reaffirmation of the Hellenic Military Defense Pact
• Diaspora: Mobilization of the Hellenic Diaspora as the fourth column of the revitalization campaign and the establishment of a Hellenic National Fund
The successful implementation of the Hellenic Revitalization Campaign must encourage support from our partners in the EU, NATO, and our allies to include the USA, the UK and Israel.
A strong and stable Hellenic presence in SE Europe and the Eastern Mediterranean is in the interest of all the stakeholders, and reinforces the EU’s and NATO’s security in the region.
A strong and stable Hellenic presence will level the playing field and lead to cooperation with Turkey across all sectors.
A strong and stable Greece and Cyprus will serve as a catalyst for the economic resurgence of the region; a market of 250 million consumers.
And finally, a strong and stable Hellenic presence will better manage the explosive predicament of illegal migration to the EU.
Observers should not underestimate the will of the Hellenic countries and the value of a strong and stable Greece and Cyprus. The “tipping point” of Taksim is an opportunity for Hellenism to reassert a regional balance of power for the promotion of peace and security in SE Europe and the Eastern Mediterranean.
*Angelos Kostopoulos is a former US Army Foreign Area Officer, Graduate of the Hellenic Army Supreme War College, and former General Manager of GE Wind in SE Europe, and President of Blue White Capital LLC.
This is an opinion guest piece and the views represented are solely of the author.