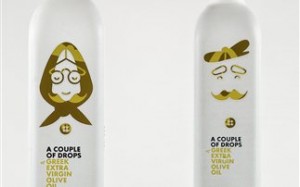 The Dieline Package Design Awards for 2013 has given distinction to a Greek olive oil campaign for its design and slogan, “a couple of drops of Greek extra virgin olive oil,” a boost for one of Greece’s most important exports.

The Greek product by the company agreekculture Ltd, which was placed Merit in the category Dairy, Spices, Oils, Sauces, & Condiments, was designed by the multi-awarded design team and think-tank BEETROOT design group.

BEETROOT said it interpreted the qualities of the product, as well as the history and ethos of its production, with a design that is both pure and honest but also infused with a touch of the team’s characteristic sense of humor. The symbols of grandma and grandpa, as well as the simplicity of the design, reflect the unrivaled quality of the extra virgin olive oil.

“(A couple of drops of Greek extra virgin olive oil) is a fun, playful design that makes me happy to use olive oil. It’s a delightful way to make the kitchen a more inviting place. I admire its clever use of materials. It’s a smart creative solution that’s cute to boot,” Yo Santosa, Founder of Ferro Concrete and Judge in The Dieline Package Design Awards 2013 said.

The Dieline Package Design Awards are a worldwide competition devoted exclusively to the art of brand packaging. The 2013 competition received over 1100 entries from 61 countries around the world, as reported in the Awards’ website.

The Dieline Package Design Awards entrants were judged by a highly esteemed panel of 12 industry experts, based on quality of creativity, marketability and innovation. Debbie Millman, President of Design at Sterling Brands, served as the Chairwoman of the judges.

When Greek Police Could Arrest Young Men for Being “Teddy Boys”