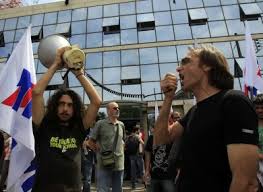 The European Broadcasting Union has called again on Greece to reopen its public broadcaster, ERT, while it attempts to overhaul the organization as daily Kathimerini reported.
In a statement released as the EBU held its 70th general assembly in Malta, the union expressed disappointment that ERT remained off air despite a recent Council of State ruling that stated public broadcast should resume.
“The Greek Government has announced it will establish a new organization to replace ERT, in line with the highest European standards. However, to do this successfully, and based on an open democratic debate, will take time,” said the broadcasting union. “The EBU unanimously calls for urgent action to immediately set up interim services and re-establish public service programming, making use of existing facilities and staff.”
The union also offered to provide expert advice to Deputy Culture Minister Pantelis Kapsis, who has been handed the task of reorganizing ERT.
The government had planned to establish a new broadcaster with about 1,000 employees, compared to the current 2,700. Kapsis has not given details of his plans but said it could take as long as three months to get the broadcaster back on air.
(source: ANSA)