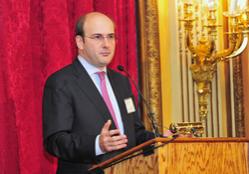 Greek Minister for Development, Kostis Chatzidakis, stressed that, “Politics can be one-sided,” referring to the need to combine fiscal adaption to development measures. On June 27, Chatzidakis held meetings in Berlin with the German Minister of Finance, Wolfgang Schäuble, as well as the German Federal Minister of Economics and Technology, Philipp Rösler, and Stefan Kapferer, State Secretary at the Federal Ministry of Economics and Technology.

“That is why the establishment of a Greek Development Fund is very important for the Greek side,” Chatzidakis stated. “We have been trying for a year to create this Fund and I think that, finally, after all the things that were said in the recent meetings, that we are entering the final stretch,” he added and expressed his optimism for the conversations he had with the German officials.

He made it clear though, that Greece has to carry out its own obligations and mentioned characteristically, “The message is determination for the Greek government at the fiscal adjustment and promotion of the structural changes as well as solidarity to our partners.” He also noted that it is now very clear that “politics cannot be one-sided”.