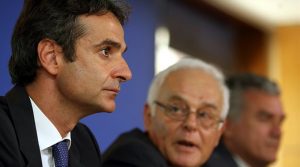 Prime Minister Antonis Samaras’ Cabinet shakeup to bring in PASOK Socialists as a reward for backing his closing of state broadcaster ERT means the government won’t be able to meet deadlines set by international lenders to start firing more workers beyond the 2,656 sacked at the station.
New Administrative Reform Minister Kyriakos Mitsotakis will now reportedly try to convince the Troika of the European Union-International Monetary Fund-European  Central Bank (EU-IMF-ECB) that he needs more time to sort out who’s going to be let go.
The government will reportedly submit a request for a further extension, until September, in order to implement its commitment to place 12,500 civil servants in a labor mobility scheme, a bureaucratic term which means they are going to be fired.
The government will use two arguments to convince the Troika to give the extension. The first is the fact that the Administrative Reform Minister has just undertaken his new duties and the second is that the ERT firings are enough for now to meet the target.
“We will do our best and we will attempt to ensure the temporal convenience so that the evaluation will be done with meritocracy and proper criteria,” Mitsotakis said.
Actually, this is the first decision of the new government after the meeting of Samaras, Finance Minister Yannis Stournaras and Mitsotakis, as the mobility of 12,500 civil servants is a prerequisite for the disbursement of the next loan installment in July.
The next most likely targets are in education and the Ministry of Interior. The government has to let go a total of 4,000 workers by the end of this year and another 15,000 in 2014.