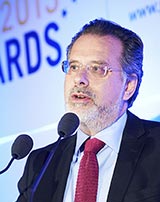 Born in Athens in 1961, Koumoutsakos was recognized for his “extremely active work” in promoting the land-based and maritime European motorway networks. Koumoutsakos has been praised for keeping this project, which is “of great importance to Europe’s development”, high on the political agenda during the “very demanding circumstances of the current financial crisis”.

Also a co-rapporteur for Parliament on the trans- European network, Koumoutsakos said that he hoped to “transform the patchwork of roads, railways, ports, airports and canals into a unified European transport network” and ensure that the “absence of links between different modes of transport… will soon belong to the past”.

“I am particularly honoured to receive this award. The transport sector has always been crucial to the European economy. Today, it is even more vital. It is the transport sector who fuels growth and gives jobs,” said Koumoutsakos.