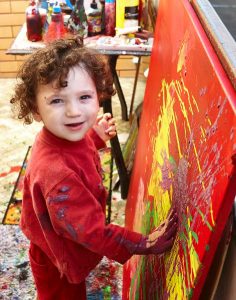 When he was only 22 months old, he was diagnosed with pervasive developmental disorder not otherwise specified (PDD-NOS), one of the five autism spectrum disorders). Bill Gates, Albert Einstein, Julian Assange and other highly intelligent people suffered from the same disease.

Vinnie Macris’ mother, Summa Shing, who observed that her son used to get really upset when his clothes would get dirty, decided to help him overcome his problem by giving him colors and a canvas.

“I thought I would give him paints and try and get him to experiment with color and the texture of paint – and so I did. If my son didn’t like to get dirty, I made him do so. I thought to myself, ‘what a nice way to get dirty with the paint’ – it’s colorful and has nice texture, and it’s pleasant,” Summa told Neos Kosmos.

As soon as Summa communicated her son’s works via Facebook and other social media, people showed interest and were surprised about the child’s artistic capacities including the owner of the art gallery C, at Fortitude Valley, Troy Williams. The way this child artist would use colors fascinated Williams and Vinnie’s first solo exhibition took place last April with great success. Vinnie’s parents gave ten per cent of all profits to the AEIOU Foundation, for children with autism.

Summa said about Vinnie: “He knows what he wants. If he asks for blue paint and you give him red, he won’t paint with it. When you meet Vinnie, you realize he knows what’s going on around him,” Summa says.
Once the artwork is finished, Vinnie walks away and doesn’t go back to it anymore. His technique is now characterized by a lot more being done with hands, rather than using tools. He doesn’t mind the feel of paint and getting dirty anymore. To describe his obsession with paints, it is enough to say that Vinnie’s first words were “Mum, open orange (paint).”