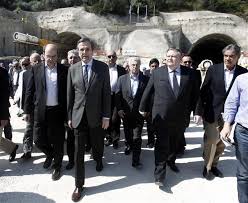 While Greek Prime Minister and New Democracy leader Antonis Samaras and his new Deputy Prime Minister and Foreign Minister, PASOK Socialist leader Evangelos Venizelos were patting each other on the back and praising their new collaboration, officials in the two parties who weren’t part of the new Cabinet have been voicing some dissension, if privately.
There’s reportedly been some inside grousing with the new administration put together by Samaras and Venizelos that gave the PASOK leader some plum jobs even though his party is fading away fast with 4-5 percent of the polls.
Venizelos’ backing of Samaras’ decision to close the national broadcaster ERT and fire all its 2,656 workers – although accepting a compromise that could bring back as many as 2,000 workers temporarily until a new station is set up – earned him big rewards, but reportedly left some in his marginalized party who didn’t get positions to complain about it.
A former Secretary of PASOK Michael Karhimakis wrote on Facebook: “We are not willing to remain silent and be absorbed in this melting pot of integration and drift,” an indication that Venizelos might lose some of his party’s 28 seats in Parliament and jeopardize the new alliance’s bare majority of 153 of the 300 votes there.
The only good part for all, it seems, is that by agreeing to Samaras’ terms, Venizelos avoided bringing Greece to its third elections in little more than a year, after the third partner in the previous coalition, Democratic Left (DIMAR) leader Fotis Kouvelis withdrew in protest over the closing of ERT.
Venizelos, who had said he too was against firing the ERT workers but gave in to get his new positions, said while he was dissenting briefly that he wasn’t afraid of new elections, even though his party would likely have been left with only a handful of seats and faced an ignominous end after winning 44 percent of the vote in 2009 under previous leader George Papandreou.
He served only two years before being hounded out of office in the face of relentless protests, strikes and riots against austerity measures – backed by Venizelos – imposed on the orders of international lenders.