TechNews
GreekReporter.com Hollywood Costa-Gavras' 'Capital' To Get US Theatrical Release in October

Costa-Gavras’ ‘Capital’ To Get US Theatrical Release in October 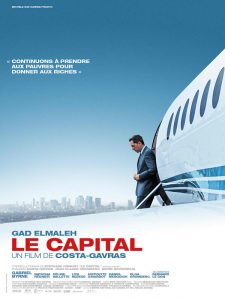 With the US premiere of his latest film, “Capital,” taking place last week at the Los Angeles Film Festival, Costa-Gavras’ political thriller is slated for a nationwide theatrical release by Cohen Media Group this October.

A big screen adaptation of Stephane Osmont’s novel “Le Capital,” the film dissects the capitalist system, centering on a European investment bank executive who tries to hold onto power when an American hedge fund company wants to buy them out. Gabriel Byrne and Gad Elmaleh star.

The 80-year-old Greek born filmmaker, who attended the Los Angeles screening on June 17, spoke to the packed audience at the festival about politics, having to defend his work, and his unconventional casting choices.

Gavras made his mark on cinema over 40 years ago with the feature film “Z.” Winning the Best Foreign Language Oscar in 1970, it captured the attention of critics and audiences alike as it told the story of the events surrounding the assassination of Greek democratic politician Grigoris Lambrakis in 1963.