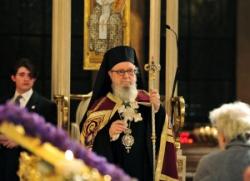 On the initiative of Archbishop Demetrios of America, $450,000 were collected to be sent to Cyprus, as a sample of active support of the Diaspora to the people of Cyprus.

Through a press release Archbishop Demetrios announced the institutions and the individuals that offered funds to Cyprus. The Archbishop of the Greek Orthodox Archdiocese of America mentioned that this is the “first aid” given by the Greek American Community and the sum will be used for operational needs of children care institutions in Cyprus.

Demetrios stressed that this financial help is the result of a “collective effort,” that began after the meeting that took place in the Archdiocese on April 3, 2013. The distribution of the money will take place after the conclusion of a research on the current needs on the island, in cooperation with the Cypriot Government and the Archdiocese of Cyprus.

The three organizations that will be financially supported by the Greek American community are the following: Care Centers for Children, Cyprus Autistic Association, and Child Clinics.