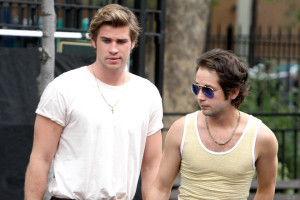 The drama, which is based on a true story, centers on two childhood friends who plan to rob an armored car depository, and the NYPD officer who stands in their way.

After failing to get into the police academy, Chris Potamitis (Liam Hemsworth), settles for a security guard job with the EMPIRE STATE Armored Truck Company. Chris makes the mistake of mentioning the company’s lax security to his best friend, Eddie (Michael Angarano), and is soon unwittingly drawn into an elaborate scheme to rob the abundant amounts of cash being stored there, resulting in the largest cash heist in U.S. History. As the stakes continue to rise, Chris and Eddie must outwit James Ransone (Dwayne “The Rock” Johnson), the veteran NYPD Detective that is hot on their trail, as well as the local crime bosses that want to know who pulled a job on their turf, or suffer the consequences.

Greek-Canadian/American actor Chris Diamantopoulos stars as the mob boss who believes the two friends might be responsible for the heist, even though the rest of New York thinks it was a major criminal conspiracy.

Potamitis, and two other Greek-Americans — Sandy Kyrkostas and Theo Kyrkostas — co-produced the film.

“Empire State” will have a straight to DVD release, and is scheduled to hit shelves September 3.