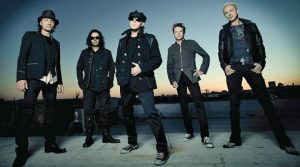 The Scorpions, the legendary rock band will be in Athens on September 11, 12 and 14, to present live for the very first time their brand new show, which will be recorded and released on DVD in 47 countries worldwide.
For this musical show, within the framework of the MTV series concert Unplugged, they will give three concerts at the Lycabettus Theater.
“Greeks are our biggest fans. This is the main reason we decided to do this project in Athens. We are coming back to prove that the Greeks have been in our hearts for all these years … We look forward to once again being in Athens and offering something unique to our Greeks fans. ”
The “Scorpions Best” album has been their best seller in Greece, while the concerts held within the past few years in the country were attended by more than 200,000 people.
Several classic hits will be heard as well as some brand new songs performed for the very first time worldwide.
The legendary Scorpions stated, “It’s the first time we present such a project in Greece and it will be something very special. Apart from our great hits, we will sing some of our favorite songs that have never been performed live again, like” Born To Touch Your Feelings” or ” When You Came Into My Life,’ along with some new compositions that will be heard for the first time. This has been more than exciting for us, it is a new challenge.”