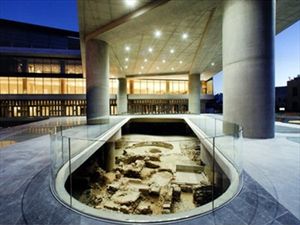 The Acropolis Museum opened its gates when the great economic crisis started affecting Greece. But it had the luck to be embraced by the Greek and international public, giving it the chance to operate for four years without public subsidy.
The Acropolis Museum celebrates its fourth birthday with optimism for the future. On Thursday, June 20, the exhibition venue and the restaurant will  remain open from 8am to midnight, while admission will be reduced to three euros for everyone.
Visitors to the museum will have the opportunity to discover along with the museum’s archaeology – carers, the hidden stories of the surviving blocks of the frieze with three-dimensional presentations on specific screens that will be placed in the Parthenon Gallery.
On the same evening, at 9 p.m., the Philharmonic Wind Orchestra of Athens will take visitors in the courtyard on a musical tour with beloved melodies from the world repertoire.
Furthermore, the Museum will launch in its shops two commemorative copies of sculptures, the head of Poseidon and the head of Artemis from the east frieze of the Parthenon.