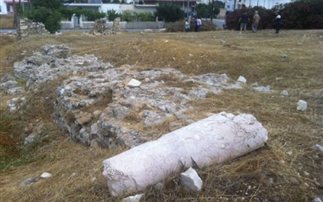 A significant monument of historical and archaeological heritage, an ancient theater, has come to light at the excavations in Ierapetra.
Today the works focused on clearing the site and excavations are expected to start. As part of the excavation of the ancient theater, the first meeting in the venue was held on June 14 under the authority of the excavation, and municipal counselor, Manos Markopoulos, the mayor Sifis Anastasakis, as well as archaeologists and elected members of the municipality, and 45 volunteers who have already expressed their interest.
On his part, the mayor of Ierapetra said, “It is known that Ierapetra has a vast historical and archaeological heritage, an important part of which is the ancient theater. An initiative for voluntary participation in the excavation brings results and leads us to work. To the municipal authorities it is extremely important that there is voluntary and active support to achieve a difficult goal. I thank Mr Markopoulos and all the volunteers who show their interest in the place and will continue to do so with a tedious, but extremely important work.”

Six of the Most Important Greek Sites in Turkey

Snakes Were Used to Heal the Sick in Ancient Greece