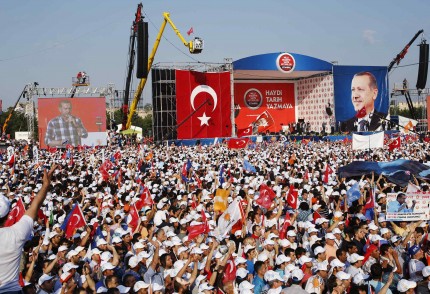 Thousands of followers of the Justice and Development Party gathered on June 16 in Kazlıçeşme Square and listened to Recep Tayyip Erdoğan announcing that such gatherings are going to take place on June 22 and 23 in Erzurum and Samsun.

Having attacked the Republican opposition party, he opened fire on BBC, CNN and Reuters, calling the media to show this image as well,” referring to the crowd in Kazlıçeşme Square.

Erdogan also targeted the Eu by referring to Greece. Concerning the resolution adopted by the European Parliament on the situation in Turkey, Erdogan called on Europeans, “Do not exceed your limits. You are not competent to issue decisions on Turkey. We do not recognize your decision. Turkey is currently not a member of the EU. If you are honest, you have to know that in Greece there were also demonstrations and incidents where civilians were killed, but you gave them financial assistance of billions of euros.”

In front of a million followers, Erdogan said, “I am the best prime minister you could have”, attacking students and the social media and did not hesitate to admit that he is watching everyone and everything.

He said about students who participated in the riots, “We have information on them and their data, and university professors who were also there will never see the classroom again.”