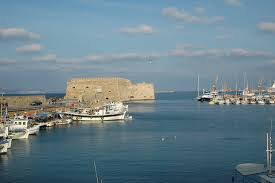 Yiannis Bras, Chairman and Chief Executive of the Heraklion Port Authority, said that four European cruise companies – two German, Tui Cruises and Aida, one Spanish, Pullmantur, and one Italian, MSC Cruises – are discussing the possibility of using Heraklion’s port on the Greek island of Crete as their cruise home port by 2015.
Bras stressed that there have already been talks with the heads of the companies on the infrastructure and the services that could be provided by the Greek side in order for an agreement to be  reached. Within the first five months of the year, the cruise passengers’ number at Crete’s biggest port has grown by almost 100% in comparison to the same period last year, amounting to 60,121.
He highlighted that for the first time this year, tourist packages have been sold to large Russian tourism organizations  that choose to cruise the Greek isles half the days. In addition, tourist packages for Israeli tourists are also expected to enter the market. According to Bras, Greece as a cruise destination should aim within the years to come to enter the Chinese market as well.
Finally, Bras expects an increase for the whole year which will amount to 40% on an annual basis, given that Heraklion  also expects the arrival of 178 cruise ships with a capacity of 327,000 passengers.