Prosecutors Will Look For ERT Corruption 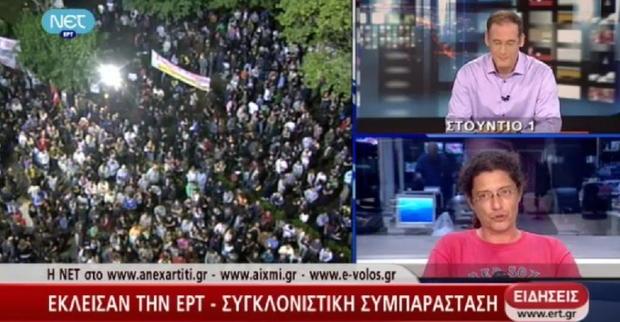 Amid complaints of favoritism and patronage from disgruntled and angry former staff members of the Greek national broadcaster ERT, all 2,656 of whom were fired by the government on June 11 with five minutes notice, Athens Prosecutor of Corruption Eleni Raikou has reportedly ordered a preliminary investigation into ERT’s contracts and appointment of producers.
The inquiry will be handled by prosecutors Popi Papandreou and Antonis Eleftherianos, who will investigate ERT’s records from the past 10  years. The agency is notorious for being packed with political hires, some of whom were said to be highly-paid no-show jobs. Prime Minister  and New Democracy Conservative leader Antonis Samaras, who ordered the firings to satisfy international lenders, said ERT was wasteful and profligate, although critics said one of his ministers had ordered his daughter hired for 3,500 euros a month, three times what top editors were paid.
“Greece had become a true Jurassic Park, a unique country in the world that saw the survival of dinosaurs with antiquated ideological obsessions that have become extinct everywhere else,” Samaras said in defending his decision.
A BBC report said that some ERT personnel claimed that not a single person had been hired on merit or in a transparent way.  ERT employees concur that the broadcaster had a questionable past, being used for political appointments and offering exorbitant pay to a few handpicked reporters, executives and advisers.
Pashos Mandravelis, a prominent columnist for the conservative newspaper Kathimerini and a vocal critic of ERT, told the BBC that the government made the right decision. “There was no other option. Every time any restructuring was attempted, ERT unions rebelled. They made the untenable demand of not a single lay-off.” He added: “In a country devastated by the crisis and suffering from such unemployment rates, this was impossible.”
The Deputy Minister who oversaw ERT and announced its closure, Simos Kedikoglou – a former ERT worker – insisted his “hands were tied” and that he played no role in the closing, although he defended it and noted that a new broadcaster, to be called NERIT, will reopen in August with less than half the current staff.
“The culture of unionism meant that ERT even ignored my direct orders to refer employees facing serious charges to disciplinary boards,” he said. He denied there was any nepotism, favoritism, or political interference in the hiring of workers and said while he was responsible for overseeing the agency, that he had no responsibility for any hirings in the past year since Samaras was elected.
ERT employee Kaity Potha, 55, told the Associated Press thatthe government was blaming the broadcaster’s staff for its own incompetence, which included giving high-paid jobs at the broadcaster for political patronage.
“Our salaries have been cut 45 percent in the past three years,” she said. “Every clown who governed Greece in recent decades dumped us not only with their own governing board but also with 200-300 new staff — their salaries have not been cut.”
ERT started radio programming in the 1930s and television in the mid-1960’s. Though it was widely regarded as reflecting government policy – it had a channel run by the military during the 1967-74 dictatorship – the broadcaster was also valued for showcasing regional and cultural content and for covering major sporting events such as the soccer World Cup and the Olympics.
It is largely state-funded, with Greek households paying a fee through its electricity bills – whether they have a TV set or not. There are also several private broadcasters in Greece, including Mega, Antenna and SKAI.
The shutdown prompted angry protests by workers and supporters around the country and a raft of international coverage claiming the move was a “blow to democracy,” but ERT critics said it was a dumping ground for patronage, was poorly-run by overpaid unqualified staff, was frequently on strike and that it was a common secret in Greece that many of the workers didn’t work.