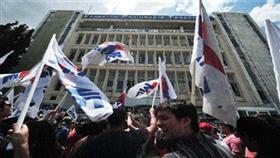 Prime Minister and New Democracy Conservative leader Antonis Samaras has set a June 18 meeting with his coalition partners, PASOK Socialist leader Evangelos Venizelos and Democratic Left (DIMAR) head Fotis Kouvelis, who are demanding he withdraw a decree that closed down the national broadcaster ERT.
The flap is threatening to undermine the coalition government, which could lead to new elections if Venizelos and Kouvelis withhold their party’s votes when Parliament votes on the shutdown of ERT, which must take place within 90 days.
Samaras said the agency which his party and PASOK packed with needless hires for generations and has 2,656 workers – all of whom were fired on June 11 – was overstaffed and that a replacement, to be called NERIT, will open by the end of August with less than half the staff.
“We are totally against seeing television screens going dark and we side with the overwhelming majority of the Greek people,” Venizelos, told Parliament. He and Kouvelis were already at odds with Samaras for withdrawing his support for an anti-racism bill aimed at the neo-Nazi Golden Dawn party that has cemented itself as the third most popular party in the country behind New Democracy and the major opposition Coalition of the Radical Left (SYRIZA).
“The government can carry on and complete its work if it can secure some common ground,” said Kouvelis in the wake of speculation that the coalition rift over the handling of ERT could even lead Greece to snap elections. The DIMAR leader said the talks with Samaras were designed, if possible, “to find common political ground, especially on the issues where our differences in political views are visible, such as in the case of ERT.”
Kouvelis, however, insisted that any discussions would have to take place while ERT is still broadcasting. He labeled Tuesday’s move to take the state broadcaster off air as “unacceptable.” “ERT undoubtedly has need of restructuring but this has to happen while it remains open,” he said.The crisis has rapidly become the worst in Samaras’ year-old government, which is credited with rescuing Greece’s euro membership by imposing harsh austerity and reform measures demanded by the country’s international creditors.
But now that the coalition’s center-left partners are threatening to block the ERT closure, the government faces the risk of breaking up and calling an early general election — a process that could disrupt the austerity process and threaten future bailout payments.
“The country does not need an election,” said Venizleos. “But PASOK does not fear elections … to think it does would be a major mistake.” PASOK is floundering at about 5-6 percent in the polls and DIMAR is dangerously near the 3 percent threshold needed to win seats in Parliament. Golden Dawn polled 13 percent in a recent survey.
Samaras’ supporters said that the talks are likely to be a formality and that he will not back down. Analysts argued the government was not doomed, but weakened further.
“I think this crisis will come to a head in three to six months, because effectively the government has lost control of the state finances … and this will become evident in coming months,” conservative commentator George Kyrtsos told the AP.
In London, Martin Koehring, an analyst at the Economist Intelligence Unit, said political instability could endanger Greece’s chances of winning debt relief from bailout lenders in the Eurozone.
“I don’t think Germany, in particular, will go ahead with any kind of debt relief if there is no stable government in Greece,” Koehring said. The Samaras-led government has already been strained by its unrelenting support for pay cuts, tax hikes and slashed pensions that have worsened a six-year recession and created a record 26.8 percent unemployment.
Greece is under pressure to fire civil servants as part of its commitments to bailout lenders — the Troika of the European Union-International Monetary Fund-European Central Bank (EU-IMF-ECB) and other euro countries — who have provided some 200 billion euros ($265.5 billion) in emergency funding since 2010.
Angered by the ERT closing, the country’s largest public and private labor unions held a 24-hour strike on June 13 that disrupted public transport, left state hospitals running on skeleton staff, and grounded flights for two hours. Protests were held around Greece, including Thessaloniki, the country’s second largest city, where 7,500 gathered, according to police estimates.
Three years of hundreds of demonstrations against austerity have all failed to move successive governments from imposing the tough measures insisted upon by the lenders in return for the rescue monies.