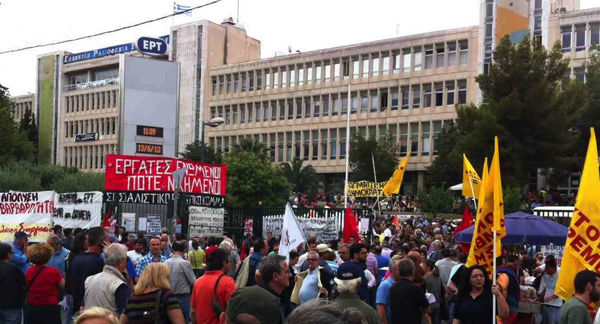 Despite the 24-hour strike of the Greek media, which has spread throughout Greece to protest against the  government’s decision to shut down the state public broadcaster, radio and TV stations will be able to cover the solidarity demonstrations and the initiatives concerning ERT. Thousands of people have gathered outside ERT headquarters in Agia Paraskevi, where the two largest Greek labor unions GSEE and ADEDY are holding a demonstration.
Another demonstration is also taking place by PAME at the main square in Agia Paraskevi, which will later head to ERT  in the presence of KKE’s leader, Dimitris Koutsoubas. Moreover, extra-parliamentary leftist groups are also holding their own demonstration at the Mint in Agia Paraskevi.
In addition, several other demonstrations are taking place today throughout Greece. In Thessaloniki, the Venizelos Statue has been set as the rallying point for a march to the ERT offices on Stratou Avenue. Meanwhile ERT’s TV broadcasts are being transmitted by KKE’s 902 TV station and on the Internet.