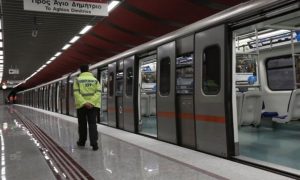 The Attiko Metro (AM), the public company building the underground railway networks in Athens and Thessaloniki has no more revenues after the application of Reppas’ law for urban transport.
As AM’s financial reports reveal, the company added a further 141 million euros worth of debt in 2012 to the overall 1.5 billion debt accumulated.
With no more economic resources the firm is expected to manage the works for the subway and tram in the entire country. The only revenues come from government funding, EU grants and loans from the European Investment Bank, which are publicly guaranteed.
This way AM has to rely on the public budget and the EIB for its funding. “The financial position and the design of the company combined with the current absence of revenues and the important height of the accumulated damage, show that its ability to continue its business activities depends on the above mentioned support,” the statutory auditors said.
ΑΜ has requested, according to the statutory auditors, for ‘Reppas’ law to be amended, so the firm will be able to generate income on its own, for example by renting the use of the Metro system.