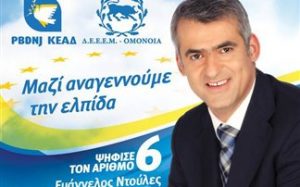 The Human Rights Union Party denounced the acts of vandalism against it that took place during the electoral campaign in Albania.

For the fourth time, unknown people destroyed billboards with posters which bore the photo of the president of the party, Vaggelis Dule, in Himara, where an important part of the Greek national minority in Albania lives. A similar incident of destroying billboards took place in the region of Vlora last week.

In the announcement made by Dule’s team, it was stressed that, “These political acts of hooliganism won’t prevent the Human Rights Union Party from achieving victory on June 23.”

They also noted that, “Despite continuous complaints, there was no reaction from the government authorities, but on the contrary, the members of the team of the Human Rights Union Party in Saranda were dismissed, in an arbitrary and illegal manner, for political reasons, from their positions in the public sector.”

The Human Rights Union Party is participating in the parliamentary elections of June 23 within the opposition coalition, which is led by Edi Rama’s Socialist Party.