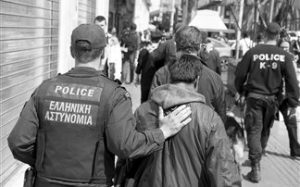 A year after beginning the ironically-named Xenios Zeus (Hospitality) program to round up illegal immigrants and then deport them, Greece’s detention centers are full of them and there’s no room for more, police and immigration officials said.
Police are now just taking the immigrants from the center and transferring them to Anavyssos, a town in East Attica, and releasing them to walk back to Athens, facing the prospect of being picked up again and taken back to the center to be released again.
Although the Greek Ministry of Public Order and Citizen Protection officially announced this week that 10,000 immigrants have been expelled from the country this year, the situation seems to have reached its limits.
Police said they can’t handle the overwhelming numbers as even during a crushing economic crisis, Greece is still the southernmost entry point into the European Union and a magnet for immigrants who come by land and boat, usually smuggled in for big money. Once landing in Greece – if they escape being caught – they usually wind up in ghettos in the center of Athens.
More evidence of the numbers is being seen especially on the island of Mytilene, near Turkey, where more immigrants are using sea routes because of a fence put up along the border. Illegal immigrants arrive frequently on the island, with some 150 recorded from June 6-10 alone, including two pregnant women, children and elderly.
The medical staff of Doctors of the World had to deal with many cases of heat exhaustion due to prolonged sun exposure, while a woman and two elderly people were transferred to the hospital. The Scouts of Lesvos set up makeshift awnings approved by the port authorities, where women and children sought shelter from the sun.
The Monastery of Prophet Ilias and father Kirill along with volunteers catered to the immigrants. The port staff said it was overwhelmed to deal with the problem and threatened protests unless they received help. Greece has asked the European Union for additional help but little has come.
The President of the Association of Port Employees, Fotis Garoufalias, told the media: “Unfortunately, they put on our shoulders a problem we cannot respond to, knowing that we cannot react. At this moment the port has turned into a detention area with no infrastructure and the authorities give us nothing for these people to eat. At the same time the health of many of our colleagues who have families and children is put into risk. We will inform the prosecutor and we are ready to protest if the situation continues.”