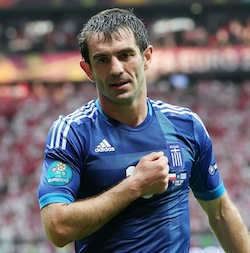 Melbourne Victory have reportedly set their sights on Greek skipper Giorgos Karagounis in the hope of signing him for next season’s A-League.
Coach Ange Postecoglou is believed to have travelled to Athens last week to speak with the most capped player in Greek football, according to The Australian newspaper.
The 36-year-old midfielder is set to leave English Premier League club Fulham, having played 21 games there last season.
Karagounis is expected to make a decision on his future by next week amid offers from Greek side Panathinaikos and other European clubs.
Karagounis, who led Greece to their upset Euro victory in 2004, has previously played for Panathinaikos, as well as Inter Milan and Portuguese club Benfica.
With Melbourne said to have the largest Greek-speaking population outside of Europe, the signing would be both a perfect fit for the Victory and a major coup for the A-League – which reaped the benefits of signing Italian star Alessandro Del Piero last season.
The marquee player drew huge crowds for Sydney FC despite their failure to reach the finals.
(source: AAP)