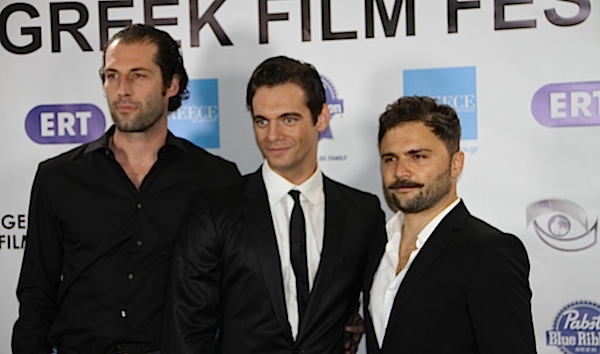 The Los Angeles Greek Film Festival opened Thursday, June 6, at the Writers Guild Theater in Beverly Hills. Cinema lovers, celebs and industry folk all turned out to support the first night of the festival, now in its seventh year.

With an impressive line-up all weekend long, including a tribute to Greek-American filmmaker Elia Kazan, LAGFF kicked off with the short “Chamomile,” followed by a feature from director Spiros Stathoulopoulos, “Meteora.”

The film, which was nominated for a Golden Berlin Bear at the 2012 Berlin International Film Festival, is a religious drama that centers on a romance between a young Greek monk and a Russian nun.

The plot takes place in the plains of central Greece, in the area of Meteora, where Byzantine monasteries are perched on sandstone pillars, suspended between heaven and earth.

Devoting their lives to the strict rituals and practices of their community, the two find a growing affection for one another that puts their monastic life under question. Torn over spiritual devotion and their human desire, they must decide which path to follow.

Flipping between real-life and vivid animation, the film deeply reflects the internal struggles of the monk and the nun as they try to suppress their feelings with no avail. Both Alexander and Koulieva-Karantinaki give stand out performances in “Meteora.”

And, while the subject matter may be a little heavy for some, comedic relief is provided by a local village man with whom the monk visits throughout the story.

Aside from a few jaw-dropping moments, and possibly a scene or two where viewers may find themselves looking away due to graphic subject matter, overall Stathoulopoulos succeeds in getting a message across: no matter how strong your faith may be, even the utmost believers will be tempted and faced with choosing between what is right and what is wrong.