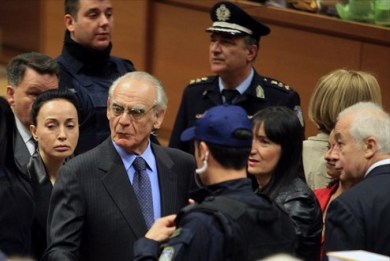 Former defense minister Akis Tsochatzopoulos ran the show in organizing a vast money-laundering operation to hide the trail of money stolen from defense contracts, witnesses said at his trial on corruption charges. That included offshore companies to be used as conduits.
According to the testimony of Panagiotis Vlachos, $14.7 million was never returned from Drumilan to the Russian off-shore firm Antey, disputing Tsochatzopoulos’ defense line. Vlachos also pointed the finger at the former minister’s cousin, Nikolaos Zigras – who has testified for the prosecution as well – as being involved up to his eyes.
Vlachos claimed that the sum was transferred to Drumila Offset in Russia and that “there is no doubt that Zigras received the 35 million Swiss francs. There is no evidence indicating the money was returned”.
The trial was interrupted during the cross-examination of the witness Evangelos Katsanos, who rented out an apartment that was bought from another company, Torcaso. Defendants Asterios Oikonomidis (of Arcon) and Zigras argued over their relationship to Tsochatzopoulos and the extent to which they acted out of self-interest, To Vima reported.
The witness recalled talk suggesting that the Tsochatzopoulos family was purchasing land in the neighborhood (his daughter Areti Tsohatzopoulou had bought an apartment across the street) and Katsanos said he was being pressured (by constant SDOE audits and visits from the police) to vacate the premises after it was purchased by Torcaso.
Despite characterizing Zigras as the “general commander,” Katsanos said that, “I believed that everything revolved around Mr. Tsohatzopoulos” when asked by the court president.