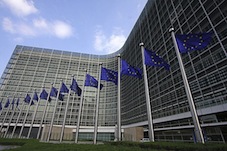 The European Commission, one of the Troika of Greece’s rescue lenders, took a big step back on June 6 from an International Monetary Fund (IMF) report that said the bailouts were flawed because austerity measures had a more devastating impact than expected.
The Commission, the operating arm of the European Union, which along with the IMF and European Central Bank teamed to provide $325 billion in two bailouts to save Greece, said that in some reports the report was “plainly wrong,” in an apparent attempt to distance itself from criticism.
“We fundamentally disagree” with the IMF’s view that Greece’s massive debt burden should have been restructured at the outset, instead of waiting until 2012, a Commission spokesman said.
At the same time, the IMF’s criticism of efforts to radically reform the Greek economy so as to put in on a path back to growth were “plainly wrong and unfounded,” spokesman Simon O’Connor said.

Covid-19: Hospitals on the Red in Greece as Intubations Reach 406 Monday