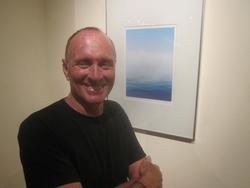 American photographer William Abranowicz has been invited to participate in the art festival Fotometria that will take place in Ioannina, the largest city of Epirus in Greece.
The photographer arrived in Ioannina on June 6 and his visit will last for a week, as he is the central person of the festival. His photo exhibition, The Greek File,  will be hosted in the Municipal Gallery from June 6 to 30.
Abranowicz invites all those thinking to visit Greece in summer 2013 to ignore the crisis and spend their time in Greece, the light of which is characterized “unique, the most perfect in the world.”
He has been a photographer for nearly 40 years. He claims that, “Photography can change the world,” and explains that its power “can bring and has brought big changes in society,” as for example the Law of Human Rights in the USA and the financial crisis in Greece.
“Greek photographers have perceived the power of image, they are doing a great job and when one day the subject of the financial crisis will come to an end, they will have recorded their historical evolution through their photographs,” Abranowicz pointed out.
“Ignore the crisis, come to Greece!” was the message that the American photographer wanted to transmit through his own photos taken two years ago, in order to support Greece. The motive for this journey to Greece was the cover of a magazine that illustrated Athens in flames. “That wasn’t a civil war, as the magazines said; the photograph was isolated- this is a financial crisis that will end,” he said explaining that lots of people did not come to Greece because of such articles.
In 1984, Abranowicz visited Greece for the first time and since then he visits the country often. He met with Greek photographers and got to know about the history of photography in Greece. He is fascinated by Greek history, civilization and poetry. “Democracy was born [in Greece], as well as the spirit of history and of civilization,” he said.
He has published two books devoted to Greece, Hellas and The Greek File, while he has some ideas for two new books, but does not yet know if they are going to be about Greece because he has not decided on the subject.
Abranowicz advised that, “Greeks should be careful in order to maintain their cultural identity.”