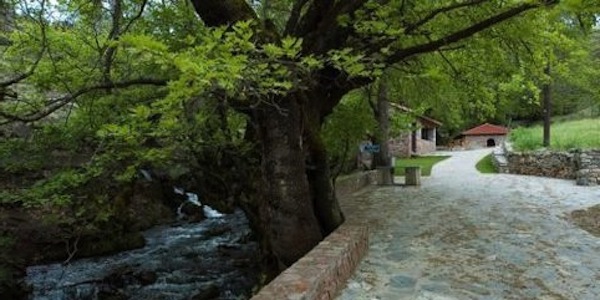 Anavra, a Greek village and former community in Magnesia, Thessaly and current part of Almyros municipality, is a village-standard among all European countries.

Sixteen years ago, this village was an abandoned place where few residents and many animals coexisted. Today, state TV channels, as well as visitors from all around Europe flock to Anavra in order to find out the village’s secret of success.
Anavra is the only region in Greece that, even during this period of financial crisis, continues to have negative records concerning unemployment, the crisis and criminality.
About 500 residents live in the village and are all livestock farmers, owners of modern and organized farms. The annual income per resident is €30,000 to €100,000, while the residents’ average age is under 40 years old.
Anavra offers free parking for all, free gym, two all-day schools, a windmill park giving up to €100,000 revenue to the community, football and basketball fields, a Folklore Museum and an environmental-cultural park of 240 acres.
The first to start this remarkable work in Anavra was Dimitris Tsoukalas, who is currently president of the non-profit company Voluntary Organization Of Anavra Magnesia For Environment, Sustainability And Culture under the name ANAVRA-ZO, which was founded in August 2010.
Tsoukalas, who was born in Anavra and left after Elementary school to study and work in Lamia and Athens, returned several years later, in 1990, with the vision to regenerate the village. He was President of the Community Anavra Magnesia for 16 years, until its abolition in 2010 by the Kallikrates law, according to ANAVRA-ZO’s website.
The secret of Anavra’s success is based on the way of self-government, with enthusiasm, vision, cheer, care, love and faith. “Even when I was president of the community, I acted as if I was a volunteer,” Tsoukalas said and added that they found and implemented many innovative programs. He noted that they never got engaged in political parties, personal ambitions and political games. “Our aim was to offer to the place and the residents of the region,” he concluded.
Anavra became well-known in Europe for two reasons. The first was the development it presented in 10 years. The second is that it conducted environment-friendly projects, such as the windmill park and the environmental-cultural park.
“We respect the fact that we are facing a financial crisis but that does not justify the abandonment of a community of such a development. This is why we created the group ANAVRA-ZO and we continue our effort,” Tsoukalas said.
“We are still optimistic about Anavra and we believe that there will be better days for our region in the future, with more self-organization that will have capability and interest,” he concluded.