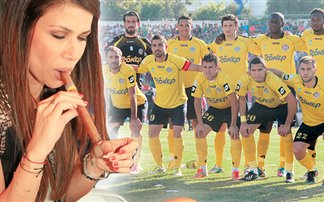 Kalloni, a small town in the west-central part of the island of Lesvos, will see its soccer team play next year in the Greek Super League only five years after the club came into existence.
The team plays in a town with only 8,194 inhabitants, a far cry from the big boys of the league’s constantly dominant powers, Olympiakos Pireos and Panathinaikos from Athens.
Until now the town was best known for its unique sardines and an annual summer festival.
Kalloni F.C. managed to climb up from Deltha Ethniki (D SLeague) football category to Alpha Ethniki (A league) just in a few seasons, which promises football fans very interesting games to follow.
The club was established in 1994 after a merger of Apollon Dafia (est. 1969) and Arisvaios Kalloni (est. 1954), two clubs that had been based in villages in the wider area of Kalloni, hence the term lekanopedio (basin) in the full name of the club (Kalloni Lekanopedio Football Club).
In 2002 it was promoted in Delta Ethniki for the first time but relegated to the local championship of Lesbos. The club, being one of the weakest of their group and without having any professional contract, won only four times, one against Rhodes, champions of the group at the end of the season.
In the 2008–09 season, it was moved up for the second time in Delta Ethniki and came close to taking first place from champion Rouf. Since the it has played teams such as Olympiacos Volos and entered the prestigious Alpha Ethniki.
According to football analysts, the success story of the team is largely attributed to its chairman Nikos Michalakis, who did not hesitate to spend loads of money to pay for expensive and talented footballers, such as the Senegalese Macoumba Kandji, and coach Babis Tennes, 59, known for helping weak teams perform better.
Everyone involved in the team is impressed how despite the difficult economic times, the President goes against the tide and always pays them on the first day of the month while an established team such as AEK is broke and fallen out of the first division.
The Chairman and former captain, Michalakis tried to provide his team with everything necessary to keep everyone undistracted in their work. The players have at their disposal a modern training center, while his staff choices have proved right for turning the once small-scale team into a serious competition for major Greek teams.

Another major factor that contributed to the team’s upgrade was the lack of any personal disputes between the players or the technicians and the will to work towards the aim of getting better under the experienced guidance of their coach.
The team already enjoys the support of locals, especially women who root for the home team, as well as journalists. The Vice Chairman of the team is Kostas Papadopoulos, who works for the National Intelligence Service of Greece, for which he has been criticized by many. He said it’s a pleasure to support and help a local football team and does not see why his profession should keep him away from his favorite hobby.
Michalakis used to be a second-in-command captain serving the ship line Lesvos-Piraeus, but after he migrated to Saudi Arabia, to take over the large tankers of a major shipping company, his luck and career took a turn for the better. As he told Proto Thema daily, he put all of his savings from 27 years of hard work into Kalloni  and has little left for himself.
Michalakis admits that he was completely ignorant of football until three years ago when he became so passionate about it that it radically changed his life.